Hangovers 101: The Hair of the Dog that Bites You - Pristine Vodka

Hangovers 101: The Hair of the Dog that Bites You

The Dog Who Bites Back

Let’s start with a hangover cure that’s literally been around for centuries, Hair of the Dog. The term is a shortened version of “the hair of the dog that bit you.”  It refers to countering your drunken evening with an ever-so-slightly drunken morning.

Or at least, the theory posits that having a drink or several the morning after a binge will cure your hangover.

I’m a sucker for origins and etymology, so I have to admit that I chose this Hangover Cure first because I really wanted to research where this saying comes from.

The internet did not disappoint. In medieval Europe, as in many cultures that were not so hip to the ways of science, it was believed that to cure an ailment, one should use the cause of the ailment.  The Latin term is “similia similibus curentur” or “like cures like.”  It is actually still used today in homeopathy (to some degrees of success, depending on who you talk to)[i]. The folk remedy referenced quite literally means that if you are bit by a rabid dog, you should treat yourself with a medicinal brew that includes some hair from that selfsame rabid dog. Solid logic from the folks who attempted to ward off the plague by farting into jars (yep)[ii].

Since immoderation in consuming alcoholic spirits is as much a part of the collective human experience as, say, breathing, it isn’t surprising that at some point in history we humans tried the Hair of the Dog that Bit You in order to recover from the effects of our overindulgence.

Today, there are two schools of thought when it comes to the realistic capabilities of fighting hangovers with more alcohol.

One: the short-term effects of alcohol consumption can mask the hangover symptoms. It’s the reason many people overindulge in the first place– it feels good. A spike in blood sugar gives us a quick energy boost. Acting as a sedative, alcohol can also dull the unpleasant physical symptoms, like a throbbing headache[iii]. Problem solved, right?

Two: a nip in the morning will actually slow the withdrawal process down. Hangovers occur when your body returns to normal. It stands to reason that the faster it happens, the more uncomfortable you’ll be during the process.  It hurts more to jump out of a second story window than it does to walk down a flight of stairs. While it may take longer to get sober, there’s less of a shock to the system[iv].

But Does Hair of the Dog Work?

The short answer is: Not really. Or at least, not very well. Yeah sure, you may feel better washing down a sick stomach with a mimosa or five. But you are just delaying the inevitable. Your body will clean itself out and you’re left to wallow your way through the ramifications of your actions. Good luck!

Here’s how it went down at our house…

6:32AM: small child crawls into our bed and demands breakfast for herself and her stuffed unicorn. Husband declares that he has a headache and his mouth is very dry, but otherwise not terrible. Hangover rating C+. 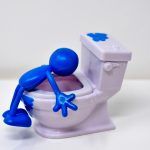 6:53AM: Husband makes a Bloody Mary and a bowl of Cheerios. It does not sit well. He eats a few tums.

The rest of the day is spent popping ibuprofen and drinking water. He is functional, but not at his best.

Don’t forget to check back next week for our next installment of Hangovers 101: The Big Greasy Breakfast. If you’re brave enough, try it for yourself and let us know if it works!